I am Dirkjan Versluijs, and I live in Lekkerkerk, township of Nederlek.
This village is located approximately 20 kilometers east of Rotterdam, on the river Lek.
The area where Lekkerkerk is located is called the Krimpenerwaard.
The Krimpenerwaard is surrounded by three rivers, the Lek, the IJssel and the Vlist.
I have been photographing in this area for a long time.
I think I was about 14 years old when I started photographing, mainly birds.
Now I am 60 years old, and I still enjoy doing this.
I inherited the passion of photography from my father, who was always in nature, and of course I regularly went with him.
My first camera was an Olympus OM10 analogue, I photographed with it for years.
Now with digital age, I had already several cameras.
The first digital camera was a Casio, I don't remember the type, but I was immediately enthusiastic.
What a convenience, if you don't like the photos, just throw them away and make others.
But soon I ran into the limitations of this camera.
I wanted to have an SLR, but they weren't there yet.
Olympus did come with a camera that was not completely reflexive, but it did start to look like it.
This was the E10, I enjoyed it a lot and made beautiful pictures with it.
Later I also bought the E20, which had more pixels. A disadvantage of this camera is that you cannot change the lenses.
That's why I decided to buy a completely different brand, the Canon 10D.
Then immediately a world of possibilities opened up.
I currently have the EOS7D and the D5 Mark4 with a variety of lenses. 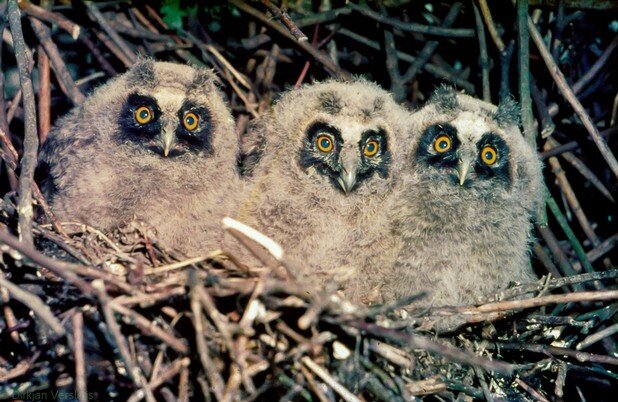 This is a very special photo, it is actually a slide, it is the only photo I did not make myself, but it is a photo with a story.
This photo was made by my father and is more than fifty years old.
It was made in Lekkerkerk in the Loet forest, where I also spend a lot of time.
They are young long-eared owls, sitting on the edge of the nest, waiting for one of the parents to feed them. But to be able to photograph them that way is not that simple.
It is late at night and normally the young owls are hidden deep in the nest.
There is a flash in one tree and the camera in the other and then ..just wait.
With a bit of luck, you can take some pictures.
But in the past you always had to spin the film, so you had to go back in the tree to do that.
As a result, things are again troubled and you could only try that 36 times, then your film roll was full and the night was also over.
You don't know the results, because the film roll still needs to be developed.
My father kept trying it for a week and of course shot a lot of film rolls.
The film rolls were sent to a development center at the time, but then something terrible happened. Something did gone wrong in the development center, so that only one film roll could be saved in part.
And now let this be the only one that has succeeded.
There were more photos, but not all of the owls' eyes were open.
If you look closely, you will see that the middle one is a male, he has a thicker beak and also looks a bit foxier.
My father has won several prizes with this photo.

Of course I always wanted to match that, but I had it much easier than back then.
This is also an analogue photo made with the Olympus OM10.
He has been scanned and polished up.
This is not such a nice story, like the one above.
This was also made in the Loet forest, but then in the new part, that was not there before.
It's a buzzard with a boy.
In my father's time, you never saw a buzzard flying and certainly not breeding in the Loet.
Now there are a lot of buzzards and also different colors, from almost white to dark brown.
I had already made a tripod in the tree, equipped with a fake camera, so they could get used to it, I only took it away when they had flown out, I made a remote control that was on the camera.
There was also a motor winder on it, so that I didn´t have to climb the tree to spin the film.
Of course it made quite a lot of noise and they were shocked.
Then it took hours before they came again, but it was getting better and they were used to it.
Now I do everything digitally and it also makes less noise, I still use the remote control.
There has been a heron colony in the Loet forest for years, where I photographed the herons in the same way.
Just look in the photo books, to the result.
Terug naar de inhoud